This is a beginner guide to karrot-backend by @id-gue and @mddemarie written for people who want to contribute to karrot, but aren't (yet) experienced Python/Django devs. Welcome and have fun!

There are two separated Repos for Frontend and Backend.

You don't need to do the setup for the frontend, but it might be useful to try out your backend through the frontend.

Both repositories are not directly connected – the data exchange works via an API.

We use Docker for the setup. How to build a Docker container is described in the README.md in the karrot-backend repository.

We would suggest to use 3 tabs in the shell:

First of all, you have to have a Group Model, allowing to create objects like "Foodsavers Berlin". One Group usually has many Stores, like "Bakery Smith". Each store can define events where foodsavers can come by and save food. These events are called PickupDate (one time event) or PickupDateSeries (repetitive event). 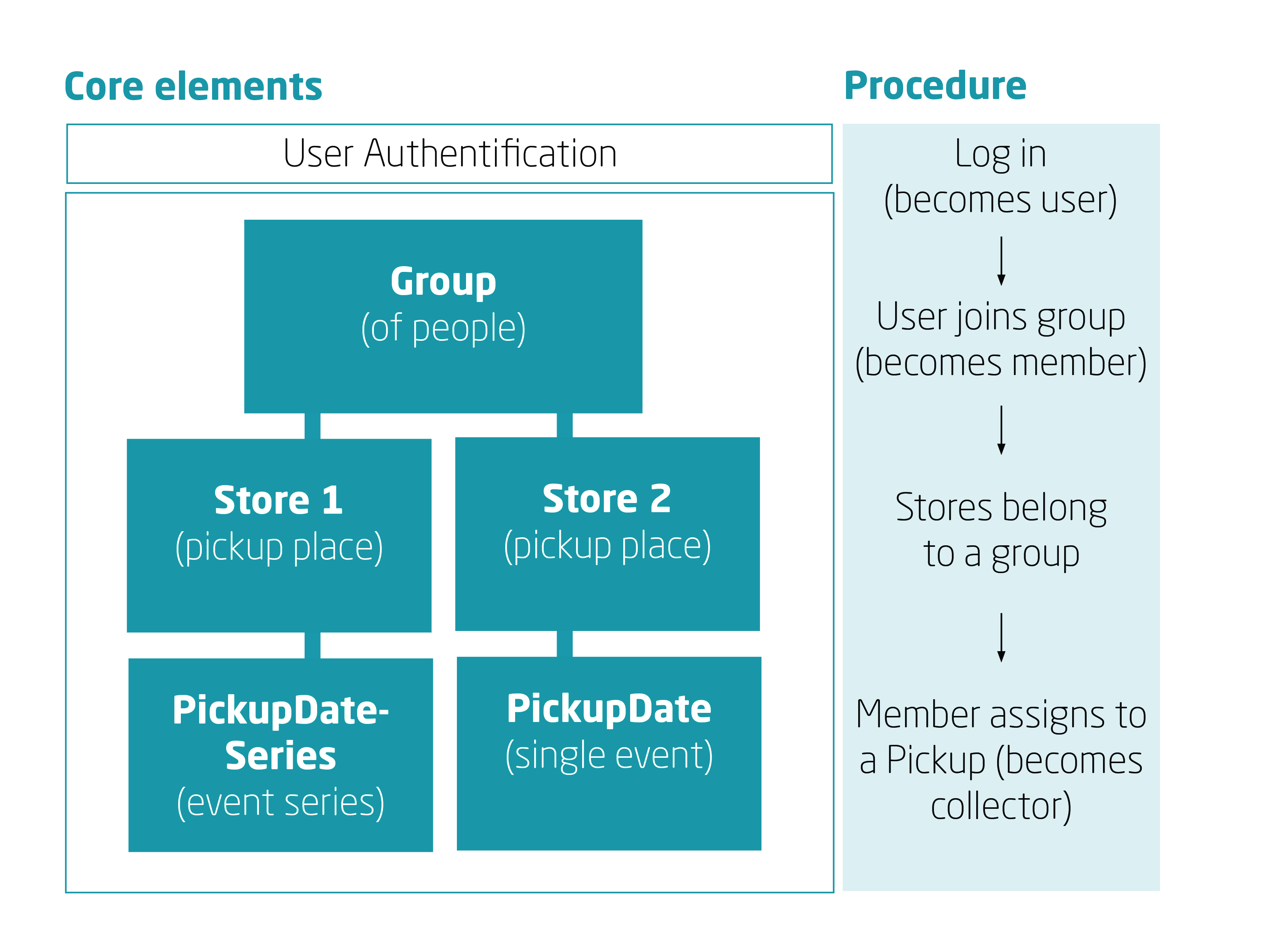 Further actions are for example:

Collectors have also an option after food pickup to leave feedback.

At the moment (September 2017) there are 15 Apps (= folders) in foodsaving. Not all of them are in use or critical for karrot.world since the project is under development and the dev team tries different approaches.

Important apps are for example:

In models.py in stores, you can find classes for Stores and Feedback, as well as PickupDate and PickupDateSeries. The last two refer to pickup-date and pickup-series in Swagger (see chapter "Server and Swagger") and contain appropriate data fields. PickupDateManager with the method process_finished_pickup_dates is an interesting class because it processes old pickups and moves them into history (even empty ones) - as a result you find PICKUP_MISSED or PICKUP_DONE in the database.

In history you find any action regarding stores, groups or pickup-dates/pickup-series from the past. As a result, you find here different HistoryTypus (just “typus” in database), e.g. PICKUP_JOIN and additional data about that action. This helps to keep a track of all actions.

We want to dig a bit deeper into the app Stores (a) to give you an example of how the foodsaving apps work and (b) because there is too much functionality inside that you might like to know. If you haven't already opened the code in your editor: do it now! Open the stores app and have a look at the files:

Please also have a look on the used urls in config/urls.py and on the archive functions in foodsaving/history.

Why do you need the server output in the shell?

On one hand, this way you will notice when an error occurred (or worse, when the server crashed). On the other hand, you can observe the communication with the server while you interact with it.

Furthermore, you see an automatically generated mail address when you start running your docker container (see chapter Setup). Use this and the password 123 to login to Swagger in your browser:

You can also add additional functionalities to your API endpoint like:

The Database is automatically populated with sample data if you use Docker. But there are missing connections between: being user -> being member -> being collector -> pick up the food. You can create these connections in Swagger for testing purposes.

Whenever you paste the url http://127.0.0.1:8000/docs/ into your browser and hit Enter, you send a request to your local server sitting on your computer (live web sites have their own host server and domain). It depends if you want to GET data or POST data. The server will use the given URL, execute some functionality on the server (probably this includes accessing the database) and respond with a view that you can see in your browser.

Every time you run the tests (like described in the chapter Setup), an additional test database gets created. After the tests are done, it gets deleted. It is not connected to the database you use in Swagger. Therefore, we need to populate it for testing new functionality.

The common structure of the tests is:

In the project, there are 2 types of tests:

1. Integration tests - test not only one class/function in a file but whole functionality of one part of the project. The server is taken as a 'black box', that is, we do not check what it actually does internally. We only verify that it creates an HTTP response that matches our expectations.

2. Unit tests - test only one function/class, e.g. the model Feedback is tested in test-models.py.